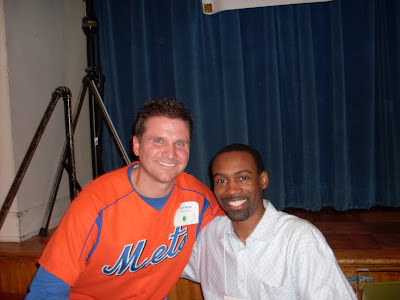 That's me and Doug Glanville, at the Strat-O-Matic 50th Anniversary Celebration!
Glanville told wonderful stories about playing the game as a kid, and how it shaped his baseball career. Apparently, his older brother (by 7 years) had made a list of steps for Doug to achieve on his way to becoming a major league player - and learning to play Strat was one of them!
He also told a story of giving Cal Ripken all of Cal's strat cards - one for each season - as a farewll gift.
A great time, and really appreciated the chance to celebrate this amazing game.
Posted by Kev at 2:50 PM