Yup, you guessed it. The squirrel has just made Sportscenter. I know the blogging community has been critical of topps and its gimmicks, but the release of topps 2012 has just closed the 6pm Sportscenter on the East Coast. That's pretty impressive marketing by topps - I can't remember seeing anything recently about baseball cards in such a high-profile spot. Any word on the rarity of this SP, though? It seems to be all over Ebay...

How much would YOU pay for a hobby box? 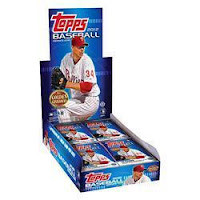 Of course, it's another Topps 2012 Series One post. My question is pretty accurately shown in my title: How much should one pony up to purchase a hobby box? Or, perhaps, if you are so inclined, how much for a Jumbo?

What has your experience in past years taught you? Does the price fall a bit in a few days or weeks? How much has the early rush inflated the product?
Posted by Kev at 10:38 AM 9 comments:

So, I tried to log on to the Topps Diamond Giveaway site last night to ship my cards to me - figured I would finish it up before ripping open my fresh, brand new Topps 2012 cards - and I get a very strange error message about the website no longer existing.

For those who "know things" out there, am I out of luck? In previous posts, other bloggers had mentioned that I could still get the cards shipped - does anyone know "for sure?" And has anyone seen this type of error message before from the Topps website? I only started messing with the Diamond giveaway a little over a week ago, so I am pretty new to the whole thing. 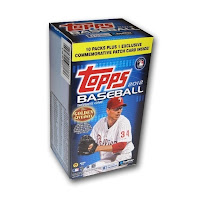 Sitting right downstairs is an unopened 19.99 blaster, and a 9.99 blaster, both waiting for me, as I wait for the baby to fall asleep. I went to Target to pick up pictures for my wife - I offered, and before she could thank me I made sure that I owned up to the fact that I was on my own mission.

At Target, they had the 10 pack plus one patch blaster, and a 5 pack blaster, and I will try to record some stats and let you know what I found. Last year I purchased the 4.99 hanging pack (36 cards) almost exclusively - I stayed away from these blasters. This year, I decided - for no good reason - that I wanted to sample the blasters as well, and compare. And at least for this night, that was my only shot, as these were the only options available. I grabbed one of each, and now I am simply blogging away, waiting for the first baby yawn that will indicate that pack-ripping time is near...

On a side note, since I use my blog to basically ask questions out to the blog-iverse and pray for any response, answer this: How do you buy cards? Hobby boxes only? Blaster sets? Sneak a $2 pack in with your coffee at Wawa in the morning? And of course, WHY do you buy your cards this way?

(Last year I bought one hobby box, on ebay. Thought about the jumbo, but decided against it...)
Posted by Kev at 7:17 PM 2 comments:

under my bed (2) - football flavored!

Forgive me for a moment for being thoroughly unable to layout these posts in any kind of viewer-friendly format...
After finding a showbox full of 1989 Topps (all card numbers 1-499 - where is the shoebox with the higher numbers?!? anyone?!?), I came across these football cards from 1979, 1980 and 1986... I am sure having Broncos and Raiders in the same post is against some kind of old-school AFC West law, but these were some of the first cool names I came across. Sadly, these showboxes showed a little more wear than my more protected cards (which are of course from the overproduction era, but it was still fun to find them. Also nearby, some Garbage Pail Kids from 1986ish, and Sportsflics! (Do you remember those? A friend of mine was convinced they were going to change baseball cards forever...)
Have a good week, those who go off to work tomorrow!
Posted by Kev at 7:22 PM No comments:

For those who have followed my rather intermittent postings, you will know that i am an inexperienced collector - and one of the things i love to do is survey the blog community to see what others collect to help me decide what i want (or definitely DON'T want) to chase.
Because I grew up in the 80's, I developed a love for chasing the "complete set" - cards 1-792 (was that the number? maybe 796?) - I would purchase a traded set once in awhile, but it was definitely not a "must-have" or thrill the way that ripping packs toward completing a set was.
So that brings me to my question, and again, I want to encourage others to give me some feedback in the comments section - do you guys consider series 1 and series 2 (1-660) a complete set? or do you feel the need to grab those "update" sets (661-990)?
I also am kinda pissed that Topps continues those insert sets in there - I mean, I understand WHY - but it is annoying. It makes me again consider the insert "complete" before Topps would say it is...
Then again, I collect for me, not for Topps, so I don't really get that bothered - but there is some sort of psychological pull toward collecting toward completion that this toys with... Eh, enough psychology...
So again, to "Update", or not to Update - that is the question...
Posted by Kev at 11:04 AM 2 comments:

a diamond giveaway card that is getting some attention

i keep getting asked for trades for this card...

my first ever diamond giveaway attempt!

I don't know why, but i have never bothered to enter a code into the topps website until today. I have about a dozen code cards, and this was my first - and only - so far.

I think it's kinda cool that I pulled such an old card - what do you think?

i love Ron Darling as an announcer - and i did like him as a pitcher, but he had the misfortune of pitching with Gooden and the super-Mets of the mid-80's. although, now that i think about it, he probably benefitted from pitching at this time - instead of the Mike Pelfrey of the last 2 seasons who has been labeled an ace without really having the tools to become one, Darling got to simply be a solid pitcher on an amazingly deep and varied staff. In 1989, he went 14-14, a disappointment after four VERY good years: 16-6, 15-6, 12-8, 17-9... 60-29 over that stretch!

only one good season after that, going 15-10 with Oakland in 1992, but still one of the symbols of the greatest Mets teams of my lifetime.

Kevin Mitchell had a wild career - and i think i read that the Mets shipped him out because he was a bad-boy who was having an influence on some of the other players... But, if you know anything about the '86 Mets, then turning them into bad-boys was a ship that had already sailed...

and lastly, he was born and grew up five minutes from my hometown, in Perth Amboy, NJ...