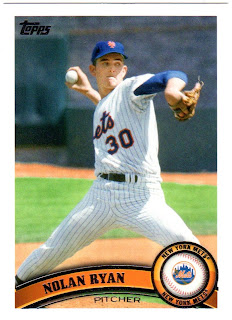 When I was young, specifically in the early 80's, my best friend was a huge Phillies fan.  His favorite pitcher was Steve Carlton, and he frequently argued that he was the best.  As a Mets fan, I didn't really remember Ryan, he was long gone by the time I got to fan-dom.  But he was a former Met, and a name who actually had the stats to due battle with Carlton.  As they battled for strikeout supremacy, Ryan became my ace in the hole for any argument.

When I opened up my packs of Topps Update 2011, I found the face of a very young Nolan Ryan, pitching for my favorite team.  I'm not sure this counts as an insert - probably it is a Short Print - and one I am happy to now own.  I don't really get why Topps does this, but from what I read on some of the other blogs out there, Topps has enough other problems. 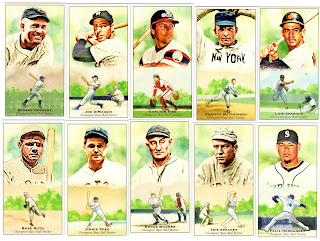 My apologies for the slightly sloppy scan, but here is my favorite insert set from the 2011 Update Set.  On these mini's, I definitely favor the old names - I sorta hate that they put the old-time guys together with the current players.  I wish the mini-set just focused on one group, either old-timers or some other niche set.  It just seems like such a haphazard collection of different players with little rhyme or reason.  That said, I do simply love almost everything about these cards:  the close up sketch-picture up top, the slightly hazy action shot below, and even the font of the player's name and italicized team name - it just all WORKS.  My only criticism is that the back is nothing more than a checklist - but I can overlook that.  I pulled a total of 18 in my two hobby boxes, and here are the rest: 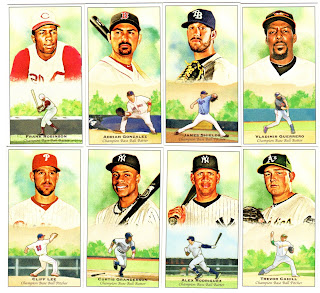 I am probably not going to try to complete this set, but if you have any others that you have nothing to do with, I'd take them!
Posted by Kev at 2:18 PM No comments: 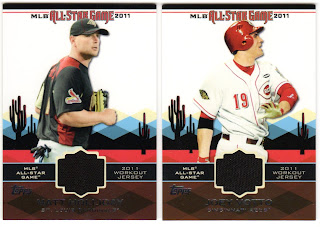 I pretty much finished up my 2012 collection - which includes (for the first time in my collecting history) the completed topps update series.  That's 990 base cards, my largest single year collection - and several completed insert sets along the way.  While I still have some 87 mini's in the update series to track down, I am pretty happy with what I have.

My new plan, since I enjoyed collecting the Update Series, is to now work backwards.  I had completed Topps 2011, but ignored update, so a couple of weeks ago I picked up two hobby boxes of 2011 update (rather cheaply, too!).  I just finished opening and ordering, so I thought I'd share some of the pulls.

I know this is probably old news to most of you - but hopefully some will enjoy the look back at the recent past.

My hobby box hits were two all-star patches, and they are pretty well-designed.  Not players that I truly love - if you have a Mets patch who you'd like to offer, I'll take it!  (I need to step up my game with trades - I've been pretty weak, so far!)
Posted by Kev at 10:40 AM 2 comments: