My third pack of jumbo proved to be the charm - the pack that got me truly excited about the set - and all it took was a few cool Mets' cards.  As I had mentioned earlier, the insert sets (which often seem to me just a bit overwhelming) this year are varied and individually appealing.  By comparison, I had a gold headache pretty quickly last year. 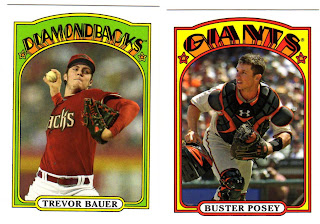 First up are my favorites - and from what I've been reading in other blogs - are probably yours, too.  Talking to my LCS dealer today, he pointed out that Topps used the same colors from the team's cards in '72, so he liked that touch.  I guess that doesn't really apply to the Bauer card, huh?  I loved the '87 mini's last year, because they reminded me of the time when I had really started collecting.  He said the same about '72 - and although I don't have any personal connection to that year's set, it's such a striking design that I'm quickly intrigued by it. 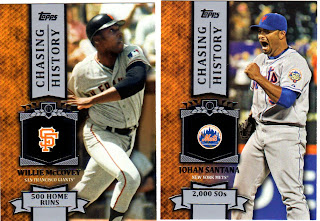 If you are not a Met fan, you probably don't realize that the greatest moment of the 2012 season perhaps became the worst moment of the 2012 season.  Santana's no-hitter marked the culmination of 50 years of great pitchers who never managed to master the no-no.  Santana's effort that night, 130+ pitches, provided the season highlight - but then he never quite recovered; nor did the pitching staff which eventually had to deal with his (and Dillon Gee's) absence.  That said, Santana's no-no was as exciting a baseball moment as my team has had in a long while - and this card reminds me of that amazin' night. 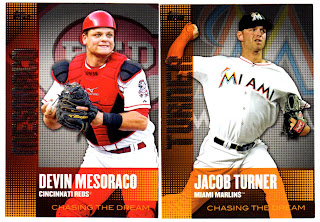 I continue to be a fan of these - especially the hovering logo lurking in the background. 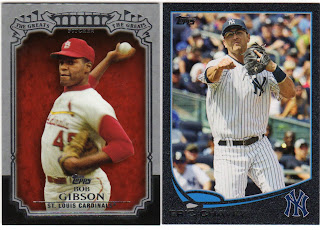 Is this Bob Gibson card a relic?  I only ask because it is very, very thick.  It kinda reminds me of the framed paper cards that you got in a blaster of Gypsy Queen last year.  My black parallel is Eric Chavez.  Eh, kinda boring. 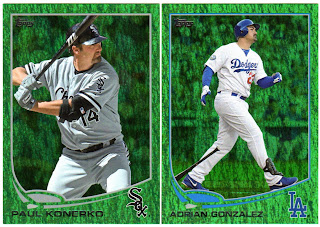 Two great hitters of the baseball appeared for my green shinies. 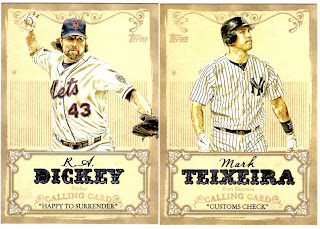 Further evidence of why I loved these packs - another Met, and a great card to see him featured on.  While Santana gave us the one amazin' night in 2012, Dickey gave Mets fans a great reason to keep watching, even as the season went down in flames.  I was so happy to see him get that 20th win at the end of the season - and if you've read his book (as I did last Spring), you'd root for him even harder.  Winning the Cy Young was another great individual moment for both him and the team's fans.  The card itself is well-designed, and it's another nod towards Gypsy Queen in my mind.  Oh, and Teixeira.  Yawn. 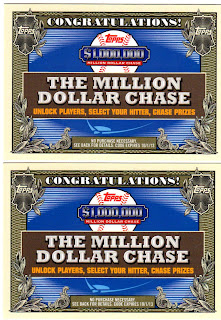 Why am I scanning these?  I popped over to ebay and saw someone selling a lot of 240 of them.  I am curious what the bloggers think about this year's code contest.  I haven't formed an opinion yet, as I'm still thinking about the Mets season.
Posted by Kev at 7:55 AM 2 comments: 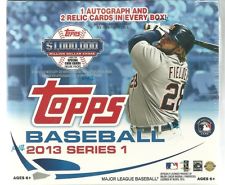 I am not someone who complains about Topps.  If you look at my past posts, I am not exactly a fanboy, but I'm also not that far from it.  I pretty much only collect Topps, and I enjoy - for the most part - every set they put out.  I like finding little things that I like about a set, and spend little time worrying about what I don't like.  Last year, I didn't love all the gold insert sets, so I didn't go crazy chasing them down - that's it.

So now it's 2013, and I'm liking (perhaps not loving, but that's okay) the new flagship offering.  I don't like the base design as much as the last three years, but I know that's a matter of taste and preference, so I'm not terribly disappointed.  And actually, I enjoy the insert sets much better this year, and may work a little harder to track some down.

Now to the point of this post... I ordered a Jumbo box this year, figuring I'll nail my base set, and grab a good number of inserts (and hits) to decide what I like.

Now, I'm not a kid.  But I was still terribly disappointed!  In the each of the two packs, there were just FIVE unrepeated cards, and THIRTY-EIGHT cards that  were duplicates.  I guess I assume it will all even out at the end, and when I finish the jumbo box, I'll have my set - but still, doesn't this just LOOK bad?!?
Posted by Kev at 10:23 AM 3 comments: