the broken Mets at the break 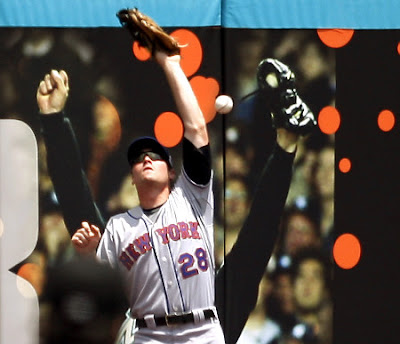 first, an obvious declaration: the Mets cannot survive another two weeks without their key players on the field. reyes and beltran need to be back before the calendar hits August, or the playoffs are unreachable.

the Phillies are done treading water, as they did for all of June - and have begun to play very well. Ibanez is back, Pedro (who will win more games than any other option they had on the roster) is coming, and Lidge will be better in the second half. The Phils gave the Mets a chance to hang around, but by next weekend there is a good chance the Mets will be 10 back.

David Wright continues his season of anomalies - high average, high strikeouts, low home runs. I have no explanation; it's gotta be more than Citi Field. Wright is a doubles machine, and that has continued, but no one could have foreseen a year of single-digit home runs this season.

Luis Castillo, second on the Mets in games started, has had a better year than anyone would have predicted - even though his numbers don't tell the whole story. Anyone who watches every game knows that there is no player more likely to pop out to the second baseman when you really need an RBI base hit. Still, a .289 average is nothing to throw away, considering the performance of...

Daniel Murphy. This is not fair, because he is so young, but the one player (if we throw out injuries) most responsible for the Mets failure this season is Murphy. He was simply a horror show in the outfield. He has been better at first base, but think about this: a non-power hitting first baseman who is now hitting .248. Simply unacceptable. I don't fault the player as much as I do the Mets' management which put a player who isn't ready - or isn't good enough - into an impossible position. The misread on Murphy has cost the Mets dearly.